It is with a sad heart even 16 years later, I still think about this day. I take a moment, no matter where I am in my life to remember that a great amazing friend of mine was taken from this world on this day due to a woman who was arrogant enough to drive while obviously intoxicated. While part of me wonders how you live with yourself after such a thing, part of me just forgets about her and focuses on my friend, Brian. Brian was more than just the average teen, that loved to tinker under the hood of the car. He had a way of being the sunshine to your life.

My most fond Brian moment? The day it was raining and we went mud bogging in his buddy's Jeep. I hadnever laughed so hard in my life - jumping around in the jeep, as we are driving up and back these mountain paths that clearly were for 4 wheelers only. When we got stuck.. well you got out and pushed the Jeep out.. covered in mud, laughing your butt off you got back in and did it again. Until it was time to go home for dinner, and you had to wash the Jeep since it wouldn't be allowed in the driveway in that condition. Those were the days.

He made me laugh. He was the brother I never had, the one that my parents took under their wing and treated like their own. He made you think about the future. Brian had this sparkle about him that made you want to be his friend. He was Brian, too young to leave us, but forever in our hearts. 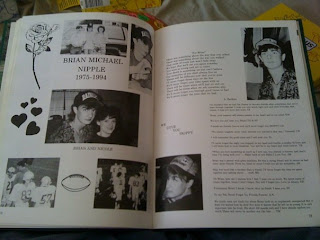 So as I wipe my tears, I bring you todays card. With heartfelt sympathy, in memory of my dearest friend Brian, who was such sunshine to my life, was the mechanic who could be paid in tea and food and who is missed by many... 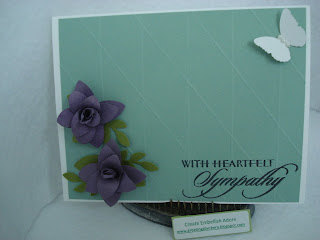 I used the 5 petal punch to make the flowers and one set of leaves. I used the leaf from the Two Step Bird punch for the other leaves and scored the cardstock every inch. Simple elegance. 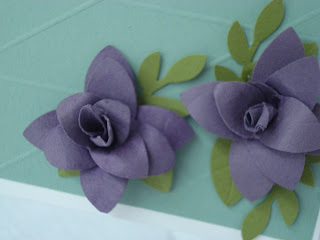 Thank you for stopping by!
Posted by Greetings By Chera

I'm so sorry about the loss of your friend Chera, I have lost family members to DUI and can empathize. Your card is beautiful, thank you for sharing it.

What a wonderful tribute to your dear friend, Brian. Thank you for sharing a small part of him with us.

Your card is beautiful.

This is a lovely card to remember your friend. Thank you for sharing you memories and card with us.

A beautiful card to remember such a dear friend. He sounds like a wonderful person. Thanks for sharing your memories with us.

What a beautiful way to remember a special friend! Sounds like you were truly blessed to have known him. Always remember him and he will always be with you!